drbarnard
1/ I have to disagree with @benthompson’s take in the @StratecheryMO email this morning on the App Store search brouhaha. Given how crude the search algorithm is, I don’t think @pschiller and @cue are lying about Apple’s apps making it to the top organically. https://t.co/OB4HeZoIwy 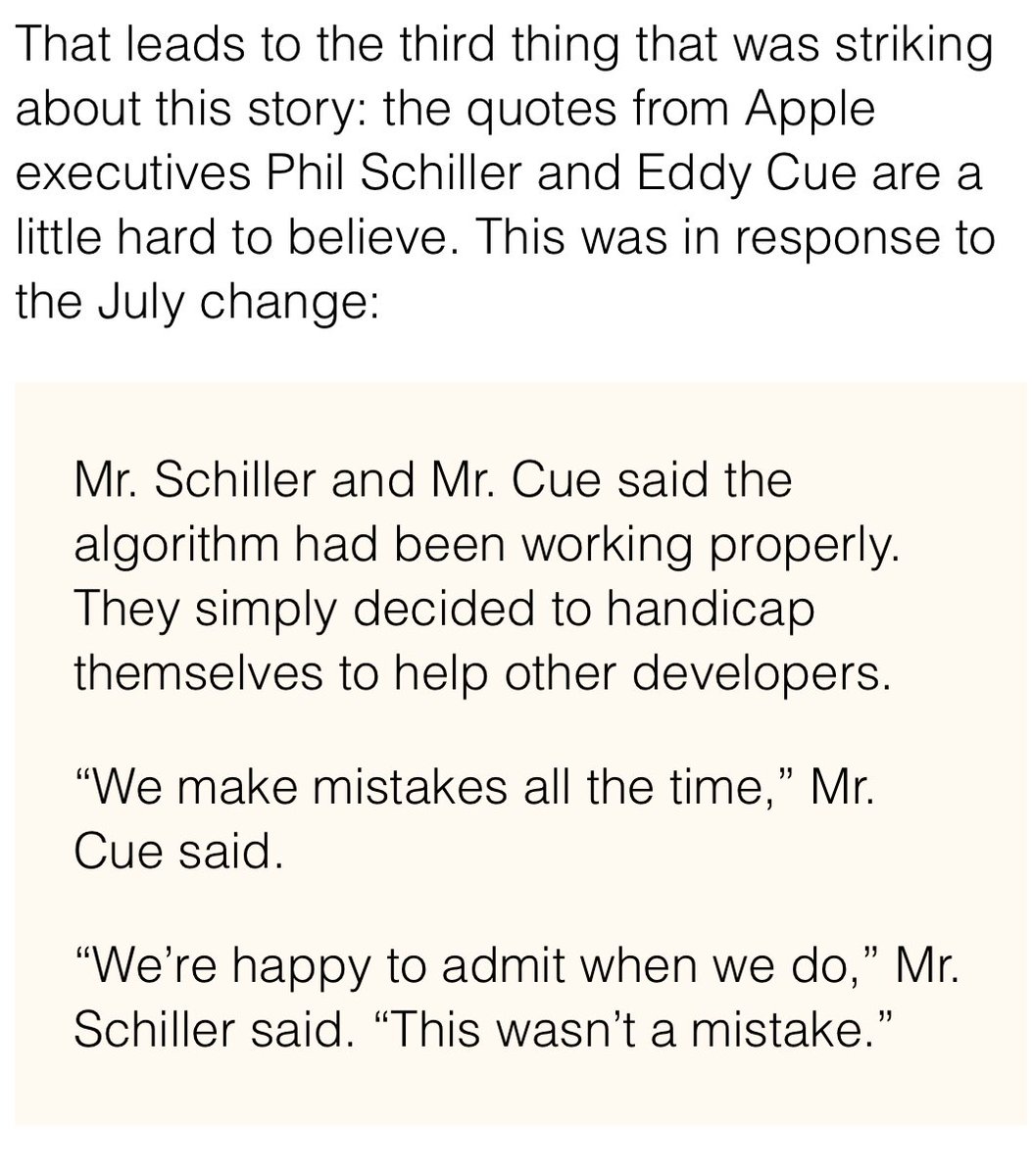 2/ Early on, App Store search was heavily weighted toward cumulative downloads, eventually they started shifting _some_ of that weight toward download momentum and even download rate for specific keywords. But that made it extremely difficult for new apps to ever get traction.
3/ I complained about this for years and Apple eventually added a ~7 day SEO boost for brand new apps to give them the opportunity to gain momentum in search. That combined with a boost from Apple’s other apps being so popular explains why new Apple apps shoot to #1 on day 1.
4/ And this chart makes a ton of sense when you realize that iOS 10 is when Apple started allowing system apps to be deleted. From that point on Apple released more and more of their system apps on the App Store which created a feedback loop of momentum. https://t.co/Zy7dv2zHtj 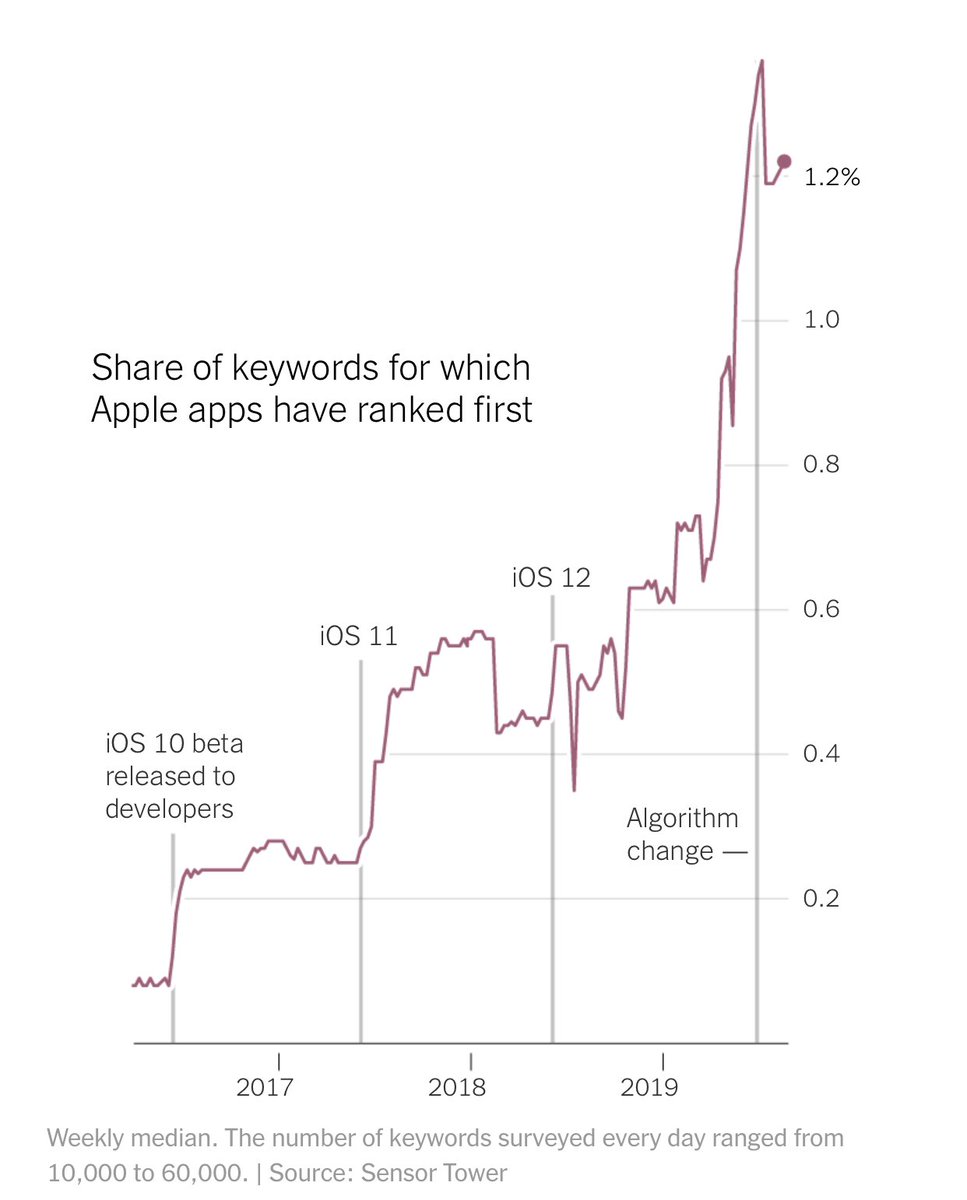 5/ “Never attribute to malice that which is adequately explained by stupidity.” App Store search has been an unmitigated disaster since the App Store was released in 2008. Apple has been blind to so many issues (including blatant manipulation) and completely inept at improving it
[Had to take a break to get the kids off to school]
6/ Here’s an example of just how bad search has been on the App Store and how blatantly developers have been manipulating with complete impunity: https://t.co/Vm9mYw5iHv 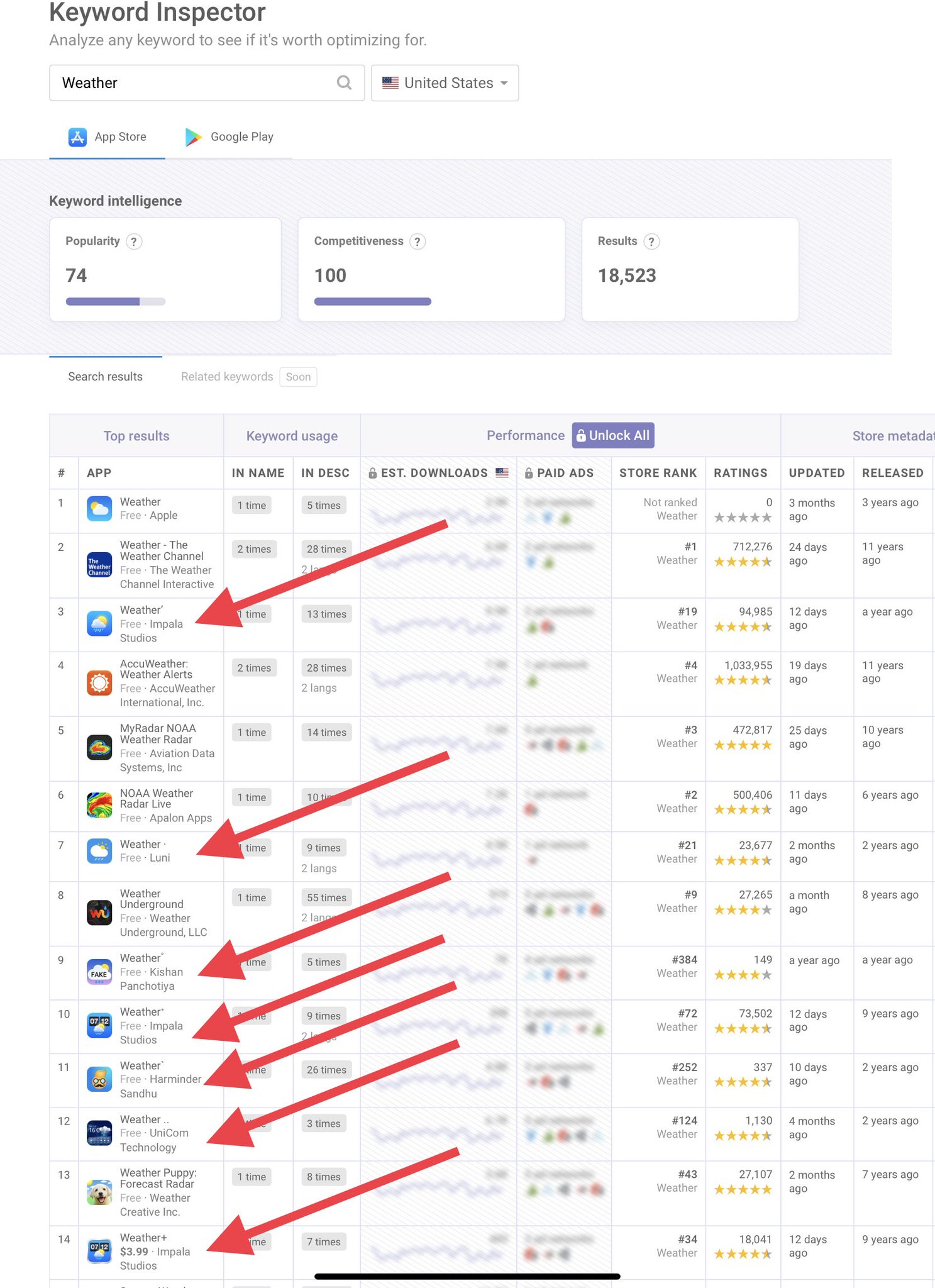 “🤦🏼‍♂️🤦🏼‍♂️🤦🏼‍♂️🤦🏼‍♂️🤦🏼‍♂️ They still don’t seem to have addressed the exact name match hack. It’s an embarrassment that 50% of the top results for such a high traffic organic keyword are named things like “Weatherº””

7/ Here’s a particularly blatant abuse of that hack: https://t.co/k4oN3Md0pz 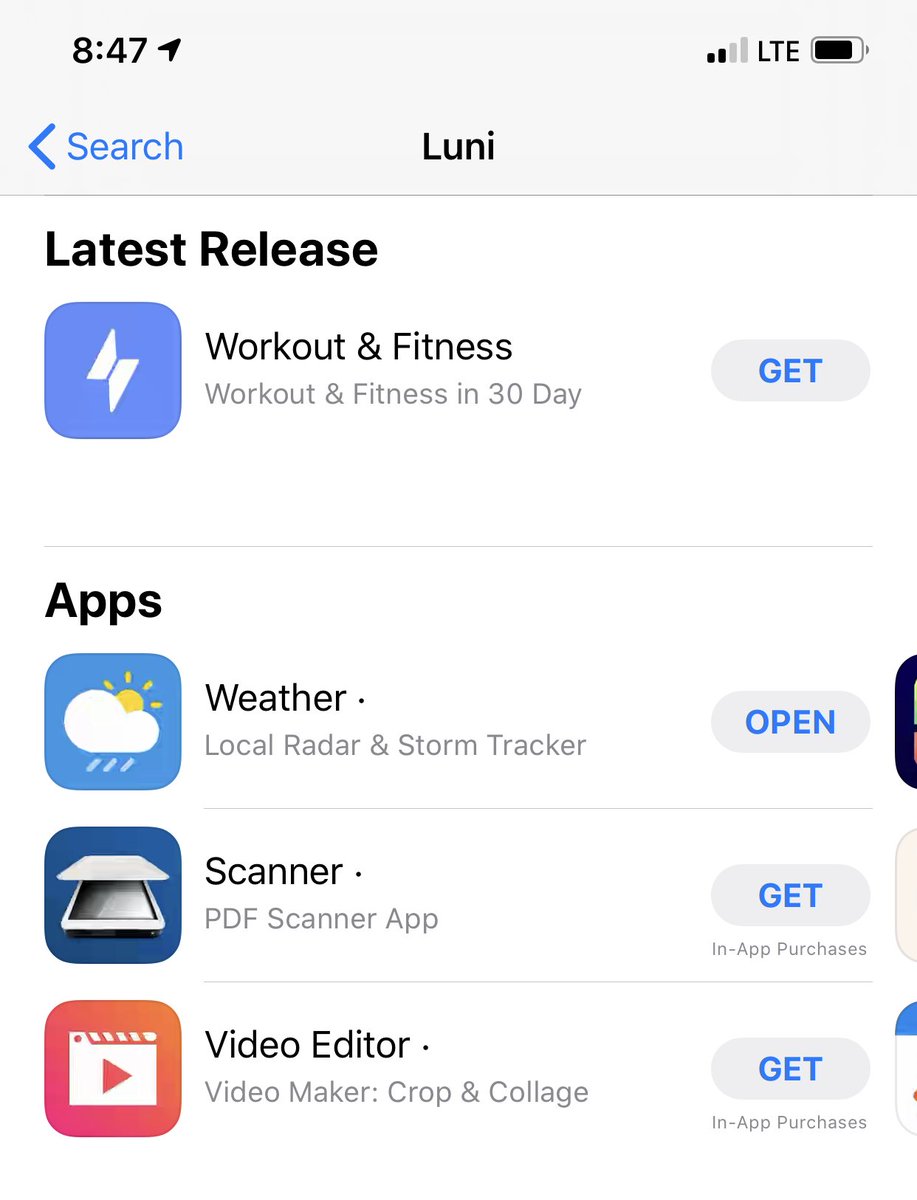 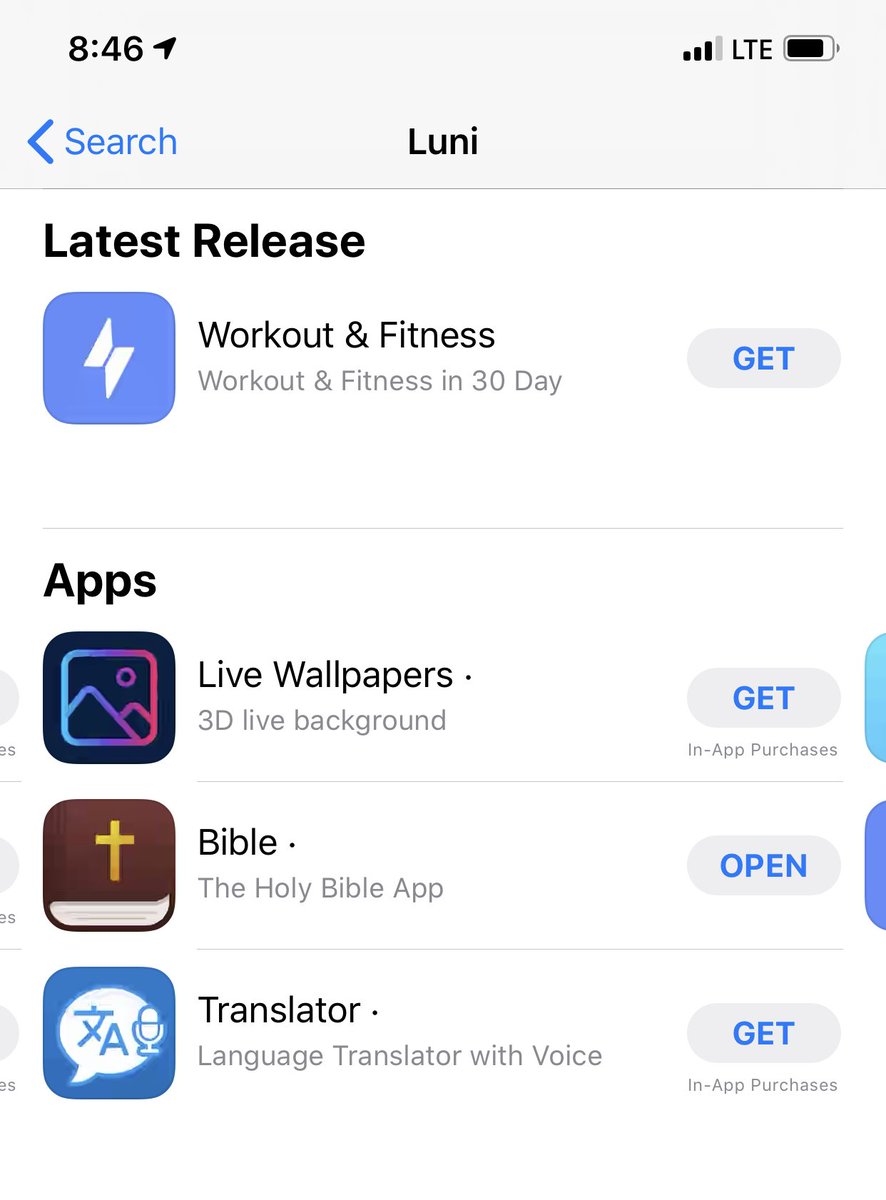 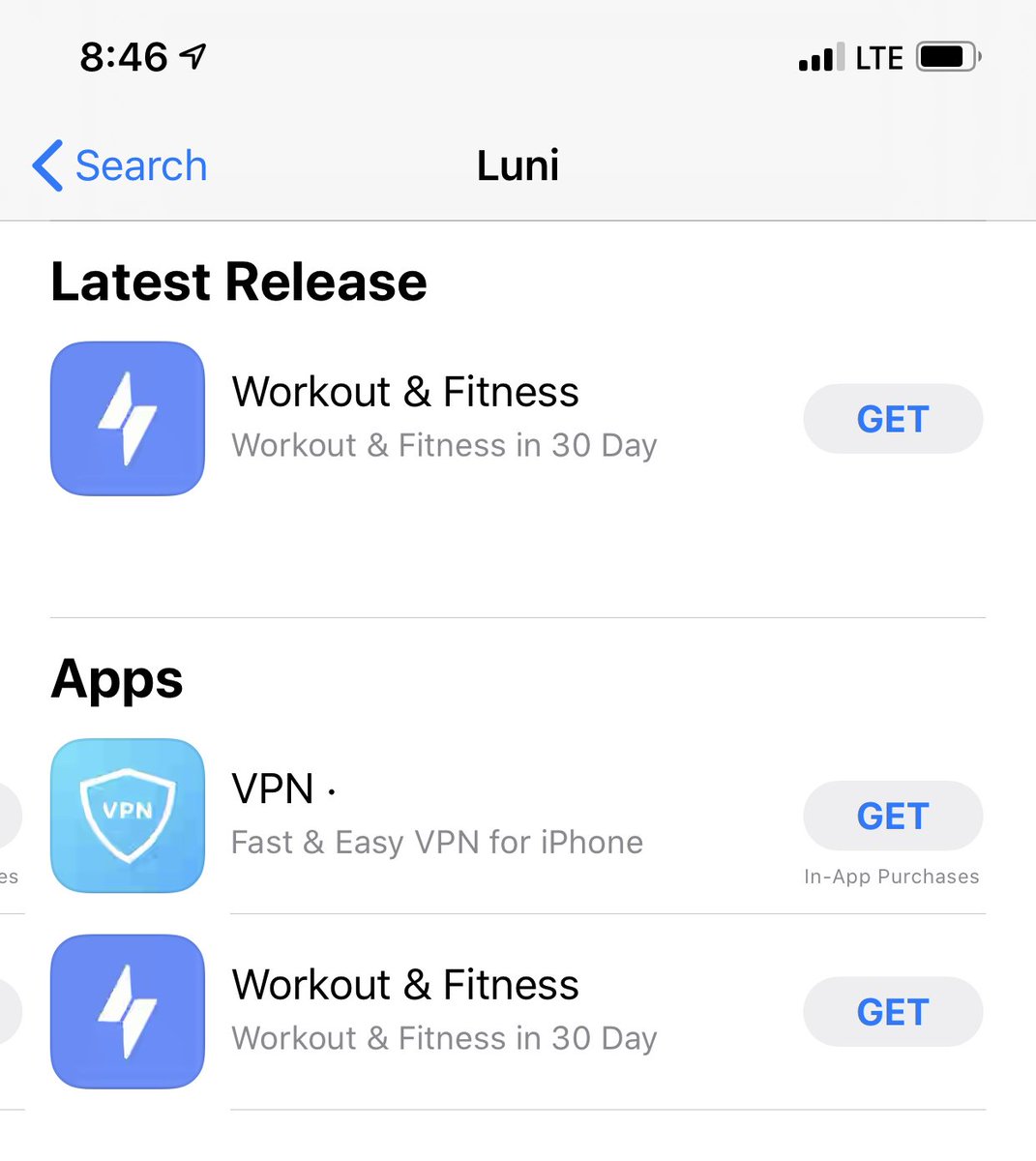 8/ And even worse, developers have been paying for keyword boost campaigns (a blatant manipulation of Apple’s search algorithm) since at least 2015 and Apple has seemingly done nothing to detect and punish the manipulation. ASO companies openly advertise the service: https://t.co/J9HqlDYGab

9/ Apple might not be lying about manipulating search themselves, but it’s 100X more embarrassing that they have allowed one of the most important experiences on their $50B/yr platform to be so broken and easy to manipulate for more than a decade.
10/ And I know a thing or two about how the game is played. I somewhat accidentally grossed over $1M on “Mirror ◎” after stumbling upon the naming hack in the fall of 2011. Look at how quickly downloads skyrocketed: https://t.co/a7MbuTuT1F

11/ To be clear, I don’t blame developers (or myself) for using little search hacks like this, I blame Apple for not fixing App Store search. Keyword boosts are another matter, those are clearly unethical IMO. But I get how some otherwise ethical developers might justify it.
12/ Here’s some hard evidence that Apple is telling the truth. An app from an indie developer shot to #2 in search for a crowded keyword: https://t.co/Thk3iMyPLJ 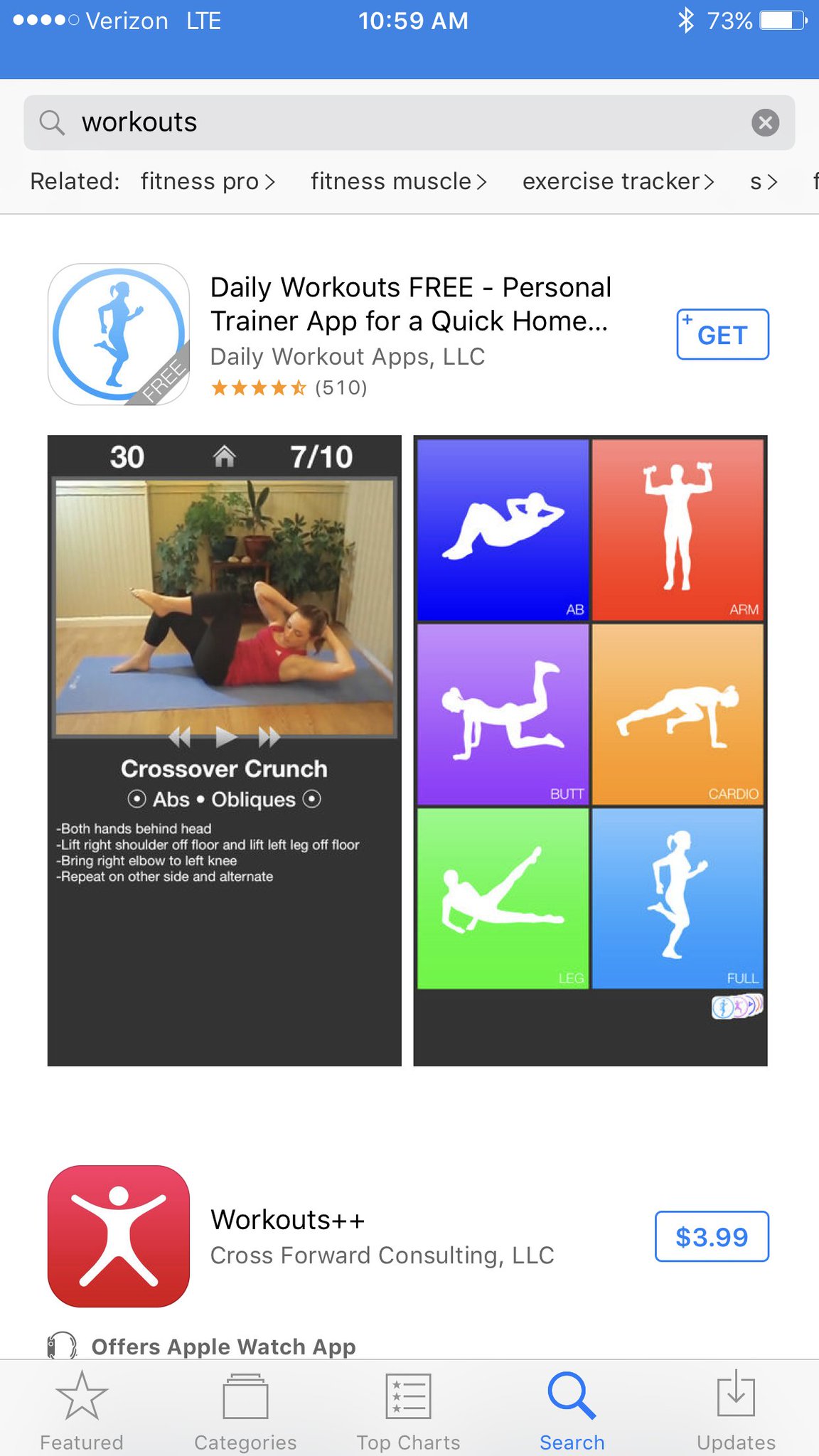 “@_DavidSmith Immediately #2 in search, nice! (It seems like Apple is now giving a temporary boost to new apps, will be interesting to watch)”

13/ It’s a shame this is going to get lost in the Apple Event news cycle. I think the NY Times was dead wrong about Apple’s manipulation, and that previous tweet is damning evidence. (But no one really likes debunking “Apple is evil”, even if it’s with “Apple is incompetent”)
14/ Here’s the evidence that the search boost lasts about a week unless the app independently gains search momentum (which Apple’s apps absolutely would) https://t.co/SND8nvD8A9 “I’d guess that if download volume via search is high, new apps maintain the boost longer (It’s tough to get paid apps downloaded via search)”

Voir la source
The plugin NeuronThemes share is not activated, please activate it and try it again. The plugin can be found in includes > plugins.